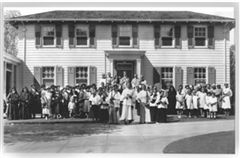 After repeated invitations from John J. Cantwell, Bishop of Los Angeles, to open a Catholic school in the Los Angeles area, the General Council of the Society of the Holy Child Jesus, made a unanimous decision in May 1931 to accept his offer and open Mayfield School in Pasadena. At that time, Pasadena’s population was about 80,000 and although there were fine private schools in Pasadena, there was not one private Catholic school among them.
On September 24, 1931, after much planning and preparation, Mayfield School opened on Euclid Avenue with a Mass and procession presided over by Bishop Cantwell himself. Enrollment consisted of twelve students, from pre-K-12th grades; boys were accepted in the primary grades. The Sisters worked hard to create an environment that was enriching and supportive and to ensure that each student was valued and treated as an individual. In addition to the usual academics and religion, classes in singing, drawing, physical education and rhythmic dancing were also included in the curriculum.

In 1933, Mother Mary Borromeo was named Reverend Mother. She would see Mayfield through wavering enrollment as the economic uncertainty of the Depression worsened and the unsettling early years of the Second World War. Even in these challenging times, Mayfield began to grow slowly over the next few years. Although the academic program played a major role at Mayfield, the school year was also marked by extra-curricular activities such as field trips and formal concerts. Christmas 1935 began a much-loved tradition at Mayfield. Under the direction of Mother Mary Bede, the young elementary students put on a Christmas play entitled Holy Night. This charming retelling of the Christmas story soon captured the hearts of Mayfield parents and friends. Community service also played an important role in Mayfield life. One special project of the early days was continuous involvement at the nearby Mexican Mission. Mayfield assumed responsibility for its Summer School Religious Instruction Program and organized activities and parties for the children there.

In the late 1930s, the Sisters considered moving the school to another location. When zoning issues proved overwhelming, the decision was made to stay on Euclid Avenue and begin to acquire surrounding property as it became available. In 1938, the property just north of the convent was purchased for an auditorium and additional classrooms. In 1942, as World War II intensified, the students were busy with the war effort selling War Bonds.
Back